Advertisements
Skip to content
Theatrical and genre-effacing New Jersey quintet Vanish have announced that they have signed to Hopeless Records and with that, their debut full-length album will be coming to fans in the new year. Familiar Faces, due out March 15, 2019, shows the band growing into themselves and opening up creatively while experimenting with plenty of genre crossover.
In addition to the signing and album announce, the band has dropped the first single from the upcoming album, “Role Play.” On the new track, the band shares “We chose Role Play as our first single to our album because it really embodies every aspect of the sound we’ve been developing over the past couple years. We hope there’s something in this song for everyone to enjoy or relate to because the overall theme really hits home for us.”Fans can check out the music video for “Role Play” at http://smarturl.it/roleplayvideo.
In central New Jersey, their contemporaries were leaning hard into heavy music or toward pop-punk, while Vanish rested somewhere between, with influences from both sides and beyond, making them oddball and stand-out enough that it worked to their advantage. Within two years of becoming a band and one year from the release of their debut EP From Sheep To Wolves, they were selected to perform at the final Vans Warped Tour date in their home state and soon after gained the attention of Hopeless Records.
On signing to Hopeless Records, the band shares “We couldn’t be happier to be a part of the Hopeless Records family. They are the most devoted and loving group of people we could have asked for and we’re excited to have them help make our musical vision a reality.”
Familiar Faces is now available for pre-order at smarturl.it/vanishmerch. When pre-ordered digitally, fans will receive an instant download of “Role Play.” 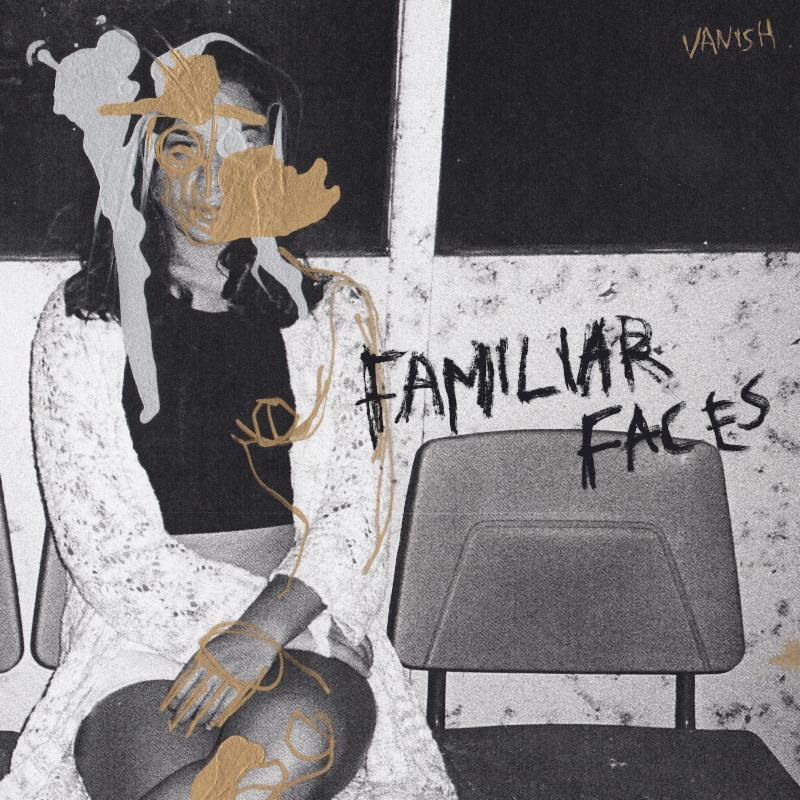 Track Listing
1. Ouija Cult
2. Somebody Else
3. Role Play
4. Familiar Faces
5. The Sound of Violence
6. dontwaitforme
7. Under Water // On Fire
8. I’m All Out of Swipes
9. Slip
10. Distance, Disappear
Vanish has ability to seamlessly cross over influences from horror films, the theatricality of the bands they grew up listening to and the trap music they indulge in currently, allowing them room to diversify in sound. Familiar Faces sees the band experimenting with more synth, louder voices and more trap influence thanks to crossover genre experimentation of ever-writing vocalist Hamilton who vows never to fall into a minor-key rock rut.
Inspired by early ’00s cabaret-esque post-hardcore, modern trap and musicians more likely to spill their guts on a stage floor than to hide behind a microphone, the members have never fit in with their peers and don’t intend to with their music. “I remember going to shows and seeing bands being super dull on stage, then seeing [those] who would go onstage and put everything into their performance. I never wanted to be someone who didn’t look like he was portraying what he’s saying,” says vocalist Pat Hamilton,effectively explaining both the Vanish live experience and the stinging emotional honesty in their music.
Vanish is Guitarist Justin Beacham, Vocalist Pat Hamilton, Bassist Jack Hinson, Guitarist Bobby Miller and Drummer Nick Perrone.
###
For more information, please visit www.hopelessrecords.com
Follow Vanish:
Twitter: https://twitter.com/vanish_us
Facebook: https://www.facebook.com/VanishUS/
Instagram: https://www.instagram.com/vanish.band/
Advertisements

We Nerd Out Vol. 146: Darlene Deschamps & Andrew Turenne of PINE on THE DON’S HIT LIST PODCAST to Discuss their Goosebump Moments!

A.J. Channer of FIRE FROM THE GODS Wades Through COVID-19 Pandemic, his Recent Loss, and “American Sun” with Madness To Creation

We Nerd Out Vol. 146: Darlene Deschamps & Andrew Turenne of PINE on THE DON’S HIT LIST PODCAST to Discuss their Goosebump Moments!