Deep in the backwoods of Louisiana comes a band that has a newfound purpose, a new found sobriety(congratulations to Cane Hill), and a renewed sense of focus which is allowing them to cultivate copious amounts of power and strength as Cane Hill has released “Too Far Gone” via Rise Records.

Elijah Reed, vocalist of Cane Hill, has stated that it was them wanting to feel invincible and all powerful via LSD that caused them to lose themselves and they went on a journey to rediscover who they are, and what we have now is a band that gives fascism the middle finger and sobriety the fist pump salute with their latest offering entitled “Too Far Gone”, which was released January 19th via Rise Records.

“Too Far Gone” starts off with the title track, which showcases the power and the return of modern day nu-metal.  The music is more straightforward and it certainly hits the listener between the eyes with the chugging power chords and gutteral screams in “Too Far Gone”.  There is a sense of an homage to the 1990’s grunge movement, where it feels like a shoutout to Layne Staley of Alice In Chains mixed with Scott Weiland of Stone Temple Pilots in “Lord of Flies”.  The lyric, “I was looking for heaven in the devil’s eyes”, is especially profound as it really shows the struggles that the band went through in order to find themselves again.

In the imagery, Cane Hill sounds chaotic mixed with a bit of a backwoods feel in the intro as it feels like something out of the movie Deliverance in “Singing In The Swamp”.  In this track, the transitions and progressions are seamless and they serve a purpose where it adds to the music and the lyrics that the band is portraying.  There are parts where it sounds melodic and there are parts where it sounds chaotic.  “Erased” has that feel where Elijah Reed channels a bit of Johnathan Davis of Korn mixed with Corey Taylor of Stone Sour/Slipknot fame, where the track sounds haunting and trudging, and it hits hard in the chorus.  “Why?” has that essential bass groove where the bass is laid on thick and the rhythms groove you into a submission that involves whips and chains, love the industrial feel to it.

Overall, this band is a kick in the teeth in terms of their heaviness.  In a world where art is afraid to push the envelope, Cane Hill completely pushes the envelope with “Too Far Gone”.  With “Too Far Gone”, Cane Hill is certainly going to take leaps and bounds to the forefront of today’s metal scene, as Madness To Creation gives them a 9 out of 10 star rating.  Check out the track listing below!

Cane Hill is currently on tour in Europe providing support for Motionless In White and Ice Nine Kills.  Check out tour dates below!

For tickets and further information for any of the shows listed above, click here!

After their European run, Cane Hill heads back to the United States to provide support for Of Mice & Men on a North American tour!  Blessthefall and Fire From The Gods are also slated to be on the bill.  Check out tour dates below!

Wednesday, February 21st- Heaven at The Masquerade in Atlanta, Georgia

For tickets and further information for the Of Mice & Men tour listed above, click here!

On the weekend of May 12th and May 13th, Cane Hill will be appearing at the Northern Invasion in Somerset, Wisconsin. 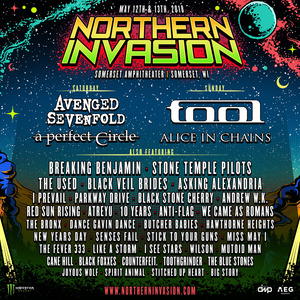 On the weekend of Friday, May 18th through Sunday, May 20th, Cane Hill will be appearing at the Rock On The Range festival in Columbus, Ohio

1 thought on ““Too Far Gone” by Cane Hill…Power and Strength!”

Sad day in the music world #RIP to #DustyHill of @zztop . I grew up on songs like #SharpDressedMan, #GimmeAllYourLovin #Legs and #LaGrange . First Joey of Slipknot now Dusty of ZZTop. #restinpeace #Godbless #bluesrock #nostalgia #music #classicrock #beards #tribute
They’re lovely, talented and #beautiful. @sznsofficial joined us on the podcast to talk all things #mentalhealth and #femaleempowerment along with their singles #BuildABoy and #Tequilawithlime . They also talk about #relationships and being #empowered . Check this out via #Spotify and #SoundCloud at the link in the #bio. #iHeartRadio check out our #InstaStory #popmusic #girlgroup #empoweringwomen #empoweredwomen #instagood #InstaPhoto #PicOfTheDay #love #pop #music #LosAngeles #podcastersofinstagram #podcast
My heart is heavy with the passing of @thejoeyjordison . As a fellow #Iowan, we took great pride knowing that @slipknot represented my home state. This photo is taken from a clip of that time her performed with @metallica . It was a definite nod of approval from the #Metallica camp. You will be missed in the #metal and the close knit #Iowa community.
For #TuesdayTalks we talked with @nocaptainbert of @chunknocaptainchunk about #mentalhealth #GoneAreTheGoodDays #protests #mindfulness and #reflecting . The #album is out this #Friday via @fearlessrecords . Please check out the link in the #bio #disclaimer: I do not own the rights to these photos. Please tag yourself if you own the rights to these photos #easycore #punk #metal #mentalhealthawareness #mentalhealth #spotify #soundcloud #instagram #podcastersofinstagram #instagood #instaphoto #picoftheday #interview #conversation
#MondayMotivation. We sometimes don’t know what real struggle is. Imagine fleeing your own country due to war in #Syria, saving a bunch of people from a sinking boat and competing in the #Olympics. This woman may not get a medal but she won the gold medal based on her story. Thanks to @upworthy for posting this and sharing this story. What is your #motivation and reason for getting up? #MentalHealth #OlympicSwimmer #100mbutterfly #swimming #summergames #summerOlympics #Tokyo #TokyoOlympics #Instagood #feelgoodstory #podcastersofinstagram PS: @yusramardini I’d love to have you on the podcast sometime!
@joyouswolfmusic rocked the @sherman_theater as they provided support for #Buckcherry back in #2019 . #photocredit📸 and #happybirthday to @kcphoto79 #rockmusic #modernrock #hardrock #mainstreamrock #gigphotography #bands #music #love #precovid19 #concertphotos #photography #photographersofinstagram #podcastersofinstagram #instagood #instaphoto #picoftheday